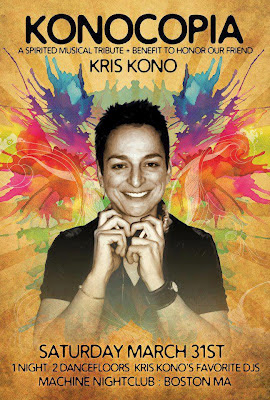 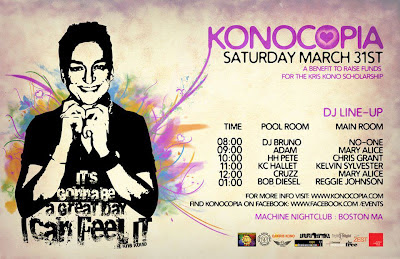 A dance and music benefit celebrating the life and music of Kris Kono, with 10 great DJs spinning in two rooms. Suggested donation $15 in advance or at the door; VIP tickets $40 with special gifts. www.brownpapertickets.com
Proceeds will go to an educational scholarship ...in Kris's honor.

"It's Gonna Be A Great Day, I Can Feel It" Kris Kono

Tax-deductible donations also may be made online to the Berklee College of Music at https://secure.entango.com/donate/wAJvTSFJnYV
***Be sure to indicate in the "other" line that money is to be directed to the Kris Kono Scholarship.

Or write a check to:

Berklee College of Music
Department of Institutional Advancement
1140 Boylston Street
Boston, MA 02215
Attn: Marjorie O’Malley
(please note on the bottom of check that it's for the Kris Kono Scholarship at Berklee)

--The Konocopia Committee thanks you for your generosity and for supporting this important event...


***parking available in nearby lot on Boylston Street, to the right of club as you face it!
Posted by K Civ at 11:37 AM 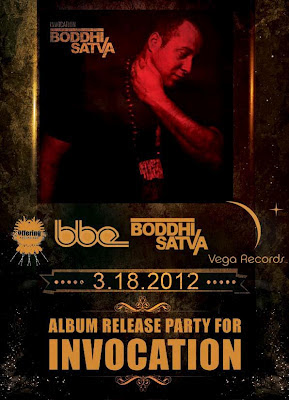 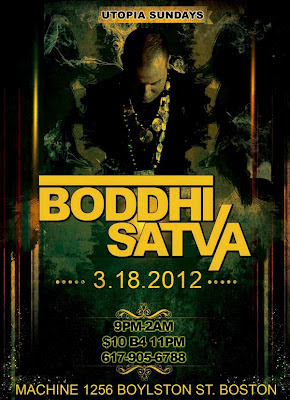 We're too excited to talk about this man. Let his music and his energy speak for itself!

Willing to pursue his studies he will move to Belgium in 2000. He will end up embracing his first love, MUSIC.
He will then begin to develop his production talents and will slowly be seduced by the sounds of Deep House and most notably the music of producers like: Kevin Yost , Alton Miller, St Germain, Osunlade, Masters At Work to name but a few.
“It was like a revelation to me, from then on I decided to play and produce this Music”.

A meeting with Alton Miller in 2005 resulted in giving birth to two Ep’s “Prelude To A Motion EP” and “See The Day”, released on trail-blazing Paris-based ATAL Music.

In 2006 he will realise that the sound of Osunlade is the inspiration that will help him craft his now respected Ancestral Soul touch that was introduced to the world on Yoruba Records with the“Satva Varti Ep”.
In 2007 ATAL, will release “Moina Ya Mokili” Boddhi Satva’s third release on the label done this time in collaboration with Abel Tabu.

Knowned to be a hard worker and called by his pears “The machine” 2008 has been a prolific year for Boddhi Satva who will create his own label “Offering Recordings” and also deliver a lot of remixes and original productions on labels like:
Bubble Soul, Seasons Limited, Seed, Ocha Records, Vega Records, Yoruba Records, Abicah Soul Recs, Franck Roger Digital, Deeper Shades Recs, Citydeep and UGH.

Now signed by world-renowned and Grammy Award winner’s Louie Vega and Osunlade, Boddhi has confirmed he could keep up his creativity by constantly recreating his musical aptitudes.

He will shortly release a full-length album showcasing his ever evolving talents.
His now well-known “Ancestral Soul” mixes and productions will set his profile to rise further. 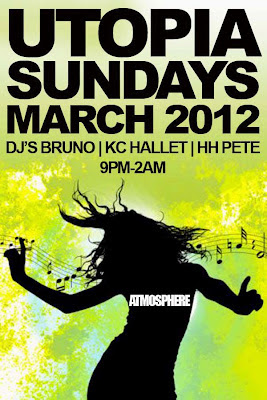 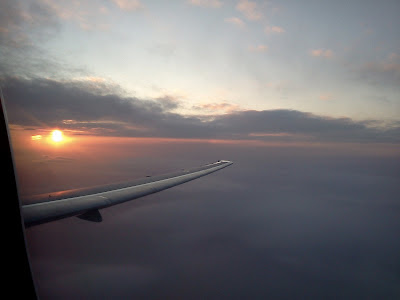